According to the 2008 National Survey on Drug Use and Health3, in the US there were 8.3m adults who had serious thoughts of committing suicide, and 2.3m who had actually made plans to commit to suicide. Of those, 1.1m actually attempted suicide, but only just over 33,000 succeeded. Which would make the ratio of failure to success 33 to 1.

In 2011, it was estimated by SAMHSA4 that attempted suicide led to 228,366  emergency department (ED) visits. Almost all involved a prescription drug or over-the-counter medication. It is worth noting that with only 5,465 actually succeeding in suicide using drugs, it means there were 42 ED visits for every successful suicide. Sobering odds of success, and there are probably lots of attempts that don't even end up in hospital. 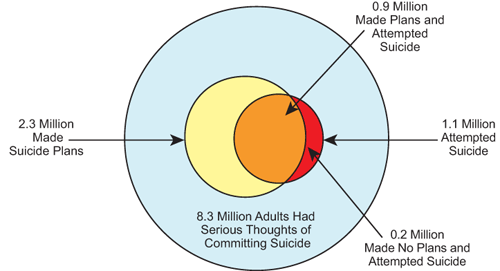 According the World Health Organisation5, in the year 2000, there were approximately 1m suicides globally. However, another study6 for the WHO states that the suicide figures from some countries may be underreported by between 20% and 100%, so the death toll could well be higher. Worldwide, suicide rates have increased by 60% over the last 50 years, and the increase has been particularly marked in developing countries.

The WHO estimates that globally there are at least 20 suicide attempts for every success, meaning that there are least 20m, yes, 20million, attempted suicides every year - and rising.

In a study done in Oxford UK7, 864 people that attempted suicide (and survived) were asked to rate, on a scale of 1 to 30, how intent they were on killing themselves (where 30 was totally intent, and 1 was hardly at all). The results are below:

The message here is that two thirds of people that try to kill themselves are not that intent on succeeding. Maybe there's a part of them that wanted to end it, and a part didn't, and due to some event that tipped them over the edge, they tried to commit suicide.

So what are the messages here? Firstly, you are not alone. Suicide is a major problem. We are living in a society where more and more people are considering suicide. Second, note that anyone thinking of trying to kill themselves is much more likely to screw it up than succeeding. The odds globally are at least 20 to 1 against, and in the US quite possibly 33 to 1 against or higher. And many of those unsuccessful attempts end up with people having nasty short or long term health implications. And third, many people who actually try and commit suicide say after the event they weren't that intent on doing it. Many people attempt suicide on impulse, and then end up living with serious health implications.

So anyone thinking of suicide should first read Help me. It is not the only option. If you are still intent on attempting to take your own life, be sure to read the dangers of whatever method you are considering, and think it over again. The pain you are currently going through might be nothing compared to pain you are about to put yourself through trying to kill yourself.